In version 10.2, SignalScope X’s Pro Tool Set now includes a multi-channel audio file player that can import audio files from your iPhone or iPad’s Music Library, or from other apps, like Files and Dropbox. Of course, it can also load local audio files stored within SignalScope X’s own document folders, such as those created by the Data Recorder tool.

The new Player tool makes it possible to playback an entire audio file, or a manually selected region of the file, with the option to loop playback indefinitely. This allows for real-time analysis to be performed on the contents of the file with SignalScope X’s other tools. So, if you have been looking for a way to analyze your pre-recorded data, the new Player tool is it.

The File Player supports AIF, CAF, and WAV audio file formats, although files can be imported from other formats. When an external file is imported, from the Music Library or from another app, the audio data is stored in a local file using one of the three supported audio file formats. Any special metadata embedded in the file by SignalScope X’s Data Recorder tool, such as calibration information, can be viewed in the newly enhanced file info display. 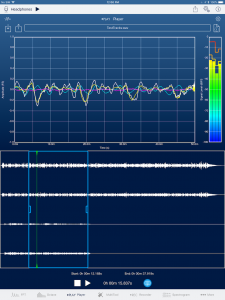 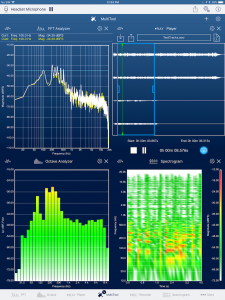